There are thousands of people who enjoy playing casino games online, possibly even millions. How many of them give any thought to the software that’s powering them? Probably not very many. Without software and the myriad of developers there wouldn’t be any online casinos, so we should thank our lucky stars they do what they do. A lot of time, energy and resources go into developing the games and providing the various services and very little recognition is given to all the hard work that is done. Which is one of the reasons we’ve written this page and because without good quality online casino software a casino wouldn’t last longer than a few days. There are actually hundreds of companies responsible for developing online casino software, but only a handful has the lion’s share of the business.

Various platforms are used when it comes to providing the games and you’ll find they can also be found at a live bricks and mortar venue. The reason there are just a small number who have made such a success of the business is that they’ve been able to put their own spin on the games and create something really unique. They also have the resources and manpower to develop new games concepts and provide players with an online casino software download. However, online casino software providers aren’t just responsible for providing games. They are relied on for everything including payment solutions, security, and entertainment. Casinos tend to use software from more than one provider and what makes the software unique is the branding that’s used. When you’re looking for an online casino it makes sense to consider the software that’s being used. So let’s introduce you to the top 5 and take it from there.

There are hundreds of casino online software developers, so many that it would be impossible to introduce them all. We will be writing about many of them on some of our other pages, but for the moment we’ll introduce the top 5. When you visit the top casinos online it’s these that you’re more likely to encounter and it’s going to be useful for you to know who’s providing the games. 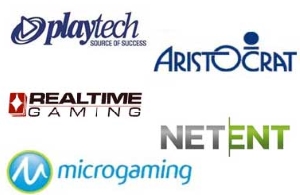 Microgaming was one of the first developers to provide software for online casinos and is actually considered to be responsible for helping to create the very first online casino. This was way back in 1994, and ever since then Microgaming has managed to keep ahead of the competition and is still recognised as being one of the best. This provider is based in the Isle of Man and is licensed to provide remote bingo and casino services along with gambling software by the UK Gambling Commission. It is a leading supplier of software for casinos online and its products also include multi-player, mobile, poker, bingo, live dealer, sportsbook, land-based, casino and business solutions. It’s been pretty productive since it began and has been able to create more than 850 unique casino games along with more than 1,200 variants. And it doesn’t seem to want to slow things down because it promises to release at least two new titles every month.

Microgaming started out by offering games to players itself, but found that players weren’t all that interested. So a different approach was taken and their games were licensed out to others. This proved to be a far more successful way of doing things and also meant the company could concentrate its efforts on development. Microgaming has another claim to fame and that’s for creating the first progressive slot machine. Many of you will have heard of Mega Moolah and not realised who developed it. In 2009, one of the biggest ever jackpots was won by a lucky player who walked away with more than $6 million. And all that they bet was 25 pennies. Progressive jackpots from other developers have since eclipsed this amount with the largest ever being a magnificent £13,209,300 that was won by a UK player. Microgaming has won some very impressive awards including:

Following shortly after Microgaming was Playtech, another leader in the world of online casino software providers. It was founded in 1999, but rapidly increased in popularity and has become a worthy contender for the crown of best software provider for online casinos. In fact there are plenty that would argue Playtech is a far better company as it can provide much more and is actually bigger than the competition. The jury’s out here at Top Casino Online. A number of other gaming companies have been acquired by Playtech, to further increase its influence on the industry and it has recently achieved great success with a new range of slots titles based on the Marvel comic super heroes.

They include the Fantastic Four, Incredible Hulk, Iron Man and many more. Playtech has also got a good reputation for its live dealer games and software. Webcams are used to provide a more personal touch and add to the real-time experience that players are now coming to enjoy and indeed require more and more. Playing live dealer games makes you feel like you actually sitting in a real casino, playing with other players and chatting with the dealer and playing with real cash. Playtech is traded on the London Stock Exchange and can offer gaming applications that include online poker, bingo, casino games, sports betting, live gaming, fixed odds and casual games and a whole lot more. Microgaming isn’t the only one to receive awards as Playtech has been the recipient of some prestigious ones too, including:

IGT is an American gaming technology developer that is based in Las Vegas, Nevada. It was its land-based slots machines that first brought it success and has been enjoying a good reputation since the 1950s. It achieved further success with its revolutionary video poker games in the 1980s and prompted it to become a public company in 1981. It is also known for introducing the first wide-area progressive slots machines, including the launch of the Wheel of Fortune progressive slot machine in the 90s. Wagerworks was acquired by IGT in 2005, another online tech company and this led to its interactive gaming division, IGT Interactive, being launched. Three other companies have since merged with IGT and it now offers a wide range of mobile-based and online games as well as being actively involved in land-based casinos and new developments. If you’ve been playing online games for a while you’ll recognise some of its titles. They include Cleopatra, Monopoly, Da Vinci Diamonds, Double Diamond and Kitty Glitter. Land-based slots are its speciality but that hasn’t stopped it developing an impressive list for the online audience.
More About IGT

NETEnt has been involved in the online gaming industry almost from the very beginning and has gained a good reputation for providing some of the best no-download software. Their games are known for being visually stunning and innovative and while it’s not as big as those we’ve already mentioned it has a loyal following and a name for offering the ‘ultimate gaming experience’. Its roots are Scandinavian and was established by a land-based operator. NetEnt concentrates its efforts on providing the best all-round gaming solutions for its customers rather than combining it with running its own casinos and it has certainly worked to its advantage. There are some very familiar and popular games provided by NetEnt and many consider it to be the best online casino software currently available. Titles include Starburst, Guns n’Roses, Gonzo’s Quest, Mega Fortune and Jimi Hendrix. It can provide software casino online games totalling more than 100, including some of the classic casino games. These include blackjack, slots, roulette, video poker and more. NetEnt has also received recognition in the form of a number of awards, including:

Compared with some of the others we’ve looked at Betsoft offers a far smaller selection of games. This is because it has decided to concentrate on quality rather than quantity. It only launched in 2005, so it’s also still a relative newcomer. But it has already managed to earn a reputation for the eye-catching graphics it has managed to incorporate into its games and its development of futuristic slots. It’s current list of more than 150 games includes some widely recognised titles such as Dr Jekyll and Mr Hyde, The Tipsy Tourist and Good Girl Bad Girl. It’s concentrated its efforts on slots more than anything else but does offer a few classic table games including poker, baccarat, roulette, craps and blackjack. When it comes to graphics and sound BetSoft puts everything into it and claims to be the originator and leader of true 3D cinematic gaming, with audio tracks being created especially for its games by professional musicians.
More About Betsoft

What to look for in the best online casino software download

When it comes to online casino software providers, finding the best one is more than just looking at the games you can play. The software effects, size of the files, speed, graphics, stability and security are all important features to consider. You also need to be certain that the software platform is legitimate and provides games that are fair for players. You should look for software that has been independently tested and reviewed with regards the payout minimums, source codes and other technical specifications that ensure a game plays fair. Part of this testing will include regular reports of payout percentages, compliance and system tests. Picking the best online casino software is really rather difficult, which is probably why online casinos tend to use a selection of providers. Each of which is able to bring something different to the table. Let’s break it down into several categories and show you those that are best in certain areas.
What it looks like – the most consistent in terms of aesthetics is undoubtedly BetSoft. But other contenders are NetEnt and IGT.
The biggest choice of products – Playtech is the winner of this title hands down. It has the biggest menu and there’s something for everyone, from slots and table games to share trading and much more.
Highest payouts – Microgaming and NetEnt are the two contenders for this title as they offer some of the highest playing slots. Some of Microgaming’s older titles have very low return to player values, which means that NetEnt has a slight edge.
Table games – when it comes to table games Playtech nudges ahead of the others.
Slots – NetEnt is the best provider of slots in terms of variety, beauty and originality.
So there you have it. All you need to know about the different software providers who make online casino games possible. We’ll be looking at a bigger selection of them in more detail on some of our other pages. But for now you’ve been introduced to the big 5, as well as learnt a little about the different games that are offered. There’s no doubt that software developers have played a big part in the increased popularity of playing casino games online and with new innovations such as live dealer games the whole experience is only going to get better and better.